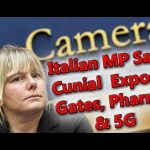 Thank you, President [of the Chambers of Deputies].

Hobbes said that absolute power does not come from an imposition from above, but by the choice of individuals who feel more protected renouncing their own freedom and granting it to a third party.

With this, you are going on anesthetising the minds with corrupted Mass Media with Amuchina [a brand of disinfectant promoted by Mass Media] and NLP [Neuro-linguistic programming], with words like “regime”, “to allow” and “to permit” to the point of allowing you to regulate our emotional ties and feelings, and certify our actions.

So, in this way, Phase 2 is nothing else than the persecution/continuation of Phase 1. You just changed the name, as you did with the ESM [European Stability Mechanism].

We have understood that people, for sure, don’t die for the virus alone. So people will be allowed to die and suffer, thanks to you and your laws, with misery and poverty. And, as in the “best” regimes, the blame will be dropped only on citizens.

You take away our freedom and say that we wanted it. Divide and Rule. It is our children who will lose more, who are raped souls – with the help of the so-called “guarantor of their rights” and of CISMAI [Italian Coordination of Services against Child Abuse].

In this way, the right to school will be granted only with a bracelet – to get them used to probation, to get them used to slavery, to involuntary treatment and to a virtual concentration camp. All this in exchange for a push-scooter and a tablet. All to satisfy the appetites of financial capitalism whose driving force is the conflict of interest – conflict well represented by the World Health Organisation, whose main financier is the well-known “philanthropist and saviour of the world”, Bill Gates. We all know it.

Now, Bill Gates, already in 2018 predicted a pandemic, simulated in October 2019 at the “Event 201”, together with Davos (Switzerland). For decades, Gates has been working on depopulation and dictatorial control plans on global politics aiming to obtain control over agriculture, technology and energy. Gates said, I quote exactly from his speech: “If we do a good job on vaccines, health and reproduction, we can reduce the world population by 10 to 15%. Only a genocide can save the world.”

With his vaccines, Gates managed to sterilise millions of women in Africa. Gates caused a polio epidemic that paralysed 500,000 children in India. And still, today, with DTP, Gates causes more deaths than the disease itself, and does the same with his sterilising GMOs designed by Monsanto and “generously donated” to needy populations.

All this while his is already thinking about distributing the quantum tattoo for vaccination recognition and mRNA vaccines as tools for reprogramming our immune system.

In addition, Gates also does business with several multinationals that own 5G facilities in the USA. On this table there is the entire Deep State in Italian sauce: SANOFI, together with GLAXO are friends of Ranieri Guerra, Ricciardi and of the well-known virologist [Burioni] that we pay €2,000 every 10 minutes for his presentations on Rai [Italian TV].

[Dr Roberto Burioni, owner and creator of an immunological research company called Pomona Ricerca Srl, which has relations with the Welcome Trust, and American foundation that sponsors events organised by Novartis and Roche (who participated in the experimentation of The Human Papillomavirus vaccine) and Johnson & Johnson (who, through Crucell, would deal with the study and development of monoclonal antibody vaccines – precisely the field of study of Burioni, who boasts eight patents for medicines designed mainly on monoclonal antibodies).]

SANOFI and GLAXO sign agreements with medical societies to indoctrinate future doctors, making fun of their autonomy of judgement and their oath.

Hi-tech multinationals, like the Roman Engineering, which is a friend of the Noble Mantoan, or bending spoons, of Pisano, which are there to control and manage our personal health data in agreement with the European Agenda ID2020, electronic identifiation, which aims to use mass vaccination to obtain a digital platform of digital ID.

This is a continuation of the transfer of data started by Renzi to IBM.

[On the Deep State table] there are the people of Aspen, like the Saxon Colao who, with his 4-page reports, was paid €800 per hour – with no scientific review – dictates its politics as a Bilderberg general as he is, staying away from the battlefield.

The list is long. Very long. In the list, there is also MEDIATRONIC, by Arcuri, and many more.

The Italian contribution to the International Alliance Against Coronavirus will be €140 million, of which €120 million will be given to GAVI Alliance, the non-profit created by the Gates Foundation. These are just a part of the €7.4 billion found by the EU to find a vaccine against Coronavirus. Vaccines which will be used as I said before.

No money, of course, for serotherapy, which has the collateral effect of being very affordable. No money for prevention – a real prevention – which includes our lifestyle, our food and our relationship with the environment.

The real goal of all of this is total control. Absolute domination of human beings, transformed into guinea pigs and slaves, violating sovereignty and free will. All this, thanks to your tricks/hoax disguised as political compromises.

While you rip up the Nuremberg code with involuntary treatment, fines and deportation, facial recognition and intimidation, endorsed by dogmatic scientism, protected by our “multi-president” of the Republic [Napolitano?], who is the real cultural epidemic of this country.

WE, WITH THE PEOPLE, WILL MULTIPLY THE FIRES OF RESISTANCE IN A WAY THAT YOU WON’T BE ABLE TO REPRESS US ALL.

I ask you, President [of the Chambers of Deputies], to be our spokesperson and to give advice to our president Conte: Dear Mr President Conte, next time you receive a phone call from the philanthropist Bill Gates, forward it directly to the International Criminal Court for crimes against humanity. If you won’t do this, tell us, should we define you as the “friendly lawyer” who takes orders from a criminal?

Sara Cunial is not the only Italian MP to have spoken up recently.

We are on the eve of April 25, and it is necessary to be united against dictatorships and united in the truth. Let’s not make this the chamber of lies.

Not the 26th of February, but the 9th of March, the science, the science evoked here said that the virus was little more than an influenza. That science is what inspired this government. It is said, it was said, and documented, it was said…

Don’t lie! Tell the truth! Don’t make this the chamber of lies. At least the principle of Giambattista Vico is applied. Vico: “We only know what we make.”

So you have heard and you have given the numbers. I want to give them, too. No, D’Attis, no, Pagani. Don’t also say here 25,000 deaths. It’s not true. Don’t use the deaths for rhetoric and terrorism. The number from the Higher Institute of Health say that 96.3% died from other diseases.

Exactly the data, the numbers… the numbers. Say this, and it is the truth! It is the truth! Read it! Read it! Colleagues, colleague, I have read them all. Sixty percent died from other diseases according to the Higher Institute of Health. If you don’t know it, study it!

While Italy was a red zone, everyone here was without masks. Today, Basini is accused because he has to wear it. You are ridiculous! You didn’t wear it until the day before yesterday!

That is exactly how it is. In Germany, the economy, health care, and schools will work perfectly on May 4. We are a state with the fewest rights in Europe. Germany has shown proof of strength and the correct response. We here are once more humiliated by Germany, even in illness.

We have closed 60% of businesses. I have given data, Dear Twizzino. Go check it out.

No, it is clear I was first to call for the closure of Parliament. Today, here we are, everybody in masks, while the other time, there were very few. There were few who were wearing the mask, and today you are pointed at if you don’t wear it.

Well, precisely because truth is the most important thing, let’s give the actual numbers; let us not continue to lie. This is certainly strong data. I read it here, too, Trizzino: 56% in Lombardy, 14% in Emilia, 8% in Piedmont, 5% in Veneto. We cannot imagine applying uniform rules with such disparate zones of the epidemic. And so, I say, at least here we speak the truth. Measure ourselves against Germany.

Let us be united in liberation against hypocrisy and lies, against falsifications, against the false numbers that are given to terrorise the Italians.

I simply said, they all give numbers but not false numbers. 25,000 people did not die of the coronavirus in Italy. It’s not true. It’s a way to TERRORISE Italians and impose a dictatorship of consent.