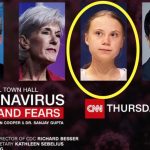 Greta Thunberg was recently wheeled out as a coronavirus expert on a CNN “show” to help forge a link between COVID-19 and climate change.

Whilst they blatantly attempt to shoehorn their climate change agenda into the COVID-19 shenanigans, let’s see what actual scientists are saying about the “settled science” of global warming, along with their experiences and thoughts on the Intergovernmental Panel on Climate Change (IPCC) itself.

– The IPCC is a political/non-scientific branch of the unelected United Nations (UN).

– The UN also houses the World Health Organization (WHO) agency, of which Bill Gates is the #2 funder.

– Major social media platforms are removing videos, posts and entire accounts of individuals whose material does not concur with the claims of WHO.

– Computer says NWO. Just like our Government, the IPCC choose to depend on disgraced Professor Neil Ferguson and his uncanny ability to cast doom via his disastrously exaggerated computer predictions. His forecasted catastrophes routinely serve as the catalyst to reduce the public to a state of fear-induced malleability and acceptance.

What Prominent Scientists Said about Global Warming and the IPCC

Climate Depot collated these quotes in 2013, so there may be many, many more.

Have any been brought to your attention by our government or by journalists of the mainstream media?

[Global warming fears are the] worst scientific scandal in the history…

When people come to know what the truth is, they will feel deceived by science and scientists.

The IPCC has actually become a closed circuit; it doesn’t listen to others. It doesn’t have open minds… I am really amazed that the Nobel Peace Prize has been given on scientifically incorrect conclusions by people who are not geologists.

Indian geologist Dr. Arun D. Ahluwalia at Punjab University and a board member of the UN-supported International Year of the Planet.

Temperature measurements show that the [climate model-predicted mid-troposphere] hot zone is non-existent. This is more than sufficient to invalidate global climate models and projections made with them!

We can expect climate crisis industry to grow increasingly shrill, and increasingly hostile toward anyone who questions their authority.

Dr. Kenneth Green was a Working Group 1 expert reviewer for the United Nations’ Intergovernmental Panel on Climate Change (IPCC) in 2001.

Alabama State Climatologist Dr. John Christy of the University of Alabama in Huntsville, served as a UN IPCC lead author in 2001 for the 3rd assessment report and detailed how he personally witnessed UN scientists attempting to distort the science for political purposes.

The quantity of CO2 we produce is insignificant in terms of the natural circulation between air, water and soil…

I am doing a detailed assessment of the UN IPCC reports and the Summaries for Policy Makers, identifying the way in which the Summaries have distorted the science.

The claims of the IPCC are dangerous unscientific nonsense.

IPCC reviewer and climate researcher Dr Vincent Gray, of New Zealand in 2007. Gray was an expert reviewer on every single draft of the IPCC reports going back to 1990, author of more than 100 scientific publications.

I have found examples of a Summary saying precisely the opposite of what the scientists said.

Nothing could be further from the truth [that the climate change science espoused in the IPCC documents represents “scientific consensus.”]!

As one of the invited expert reviewers for the 2007 IPCC documents, I have pointed out the flawed review process used by the IPCC scientists in one of my letters.

I have also pointed out in my letter that an increasing number of scientists are now questioning the hypothesis of Greenhouse gas induced warming of the earth’s surface and suggesting a stronger impact of solar variability and large-scale atmospheric circulation patterns on the observed temperature increase than previously believed.

Unfortunately, the IPCC climate change documents do not provide an objective assessment of the earth’s temperature trends and associated climate change.

[The concept of consensus on global warming is a] sham.

That is how they make it seem that all the top scientists are agreed.

Paul Reiter, a malaria expert formerly of the Centers for Disease Control and Prevention, participated in a past UN IPCC process and had to threaten legal action to have his name removed from the IPCC.

The same individuals who are doing primary research in the role of humans on the climate system are then permitted to lead the [IPCC] assessment!

There should be an outcry on this obvious conflict of interest, but to date either few recognize this conflict, or see that since the recommendations of the IPCC fit their policy and political agenda, they chose to ignore this conflict.

In either case, scientific rigor has been sacrificed and poor policy and political decisions will inevitably follow.

We need recognition among the scientific community, the media, and policymakers that the IPCC process is obviously a real conflict of interest, and this has resulted in a significantly flawed report.

The Kyoto theorists have put the cart before the horse. It is global warming that triggers higher levels of carbon dioxide in the atmosphere, not the other way round…

A large number of critical documents submitted at the 1995 U.N. conference in Madrid vanished without a trace. As a result, the discussion was one-sided and heavily biased, and the U.N. declared global warming to be a scientific fact.

As the premise of global warming is clearly broken, the ludicrous link between COVID-19 and climate change must also be broken.

The ongoing bullshit “science” delivered by the agencies of the United Nations is providing the basis for the fabrication, manipulation and now the fascist censoring of anyone airing a view that does not concur.

Yet the fact remains that the “real enemy” is not carbon – and never was:

The common enemy of humanity is man.

In searching for a new enemy to unite us, we came up with the idea that pollution, the threat of global warming, water shortages, famine and the like would fit the bill.

All these dangers are caused by human intervention, and it is only through changed attitudes and behavior that they can be overcome.

The real enemy then, is humanity itself.

Regardless of the words they choose, as they declare us the enemy, they are blatantly declaring themselves OUR enemy. Please give that some thought.

These entities are not just being upheld by our politicians and mainstream journalists. So too the majority of the public, via their acquiescence and mindlessness, are acting as willful pawns in the execution of our enemy’s disturbing agendas.

It can be very discouraging when you’re out and about – so many people you encounter on the street giving you a wide berth, people hiding behind their masks, succumbing to the fear and losing control of their own minds.

It seems some people may never wake up. But, due to the absurdity of the COVID-19 situation, many people are now starting to realise something is wrong and are beginning to question what’s going on.

With more and more people speaking up and many minds starting to open, please take this huge opportunity we’ve been presented to point people in the right direction.