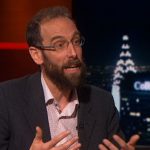 Dr Keith is one of the most prominent proponents of stratospheric aerosol geoengineering (SAG). In this open letter, we challenge Dr Keith with a number of concerns regarding the SAG proposal.

I have seen your Colbert Report interview where you appear to publicise and promote the idea of Stratospheric Aerosol Geoengineering (SAG) – namely, the spraying of thousands of tonnes of toxic substances into our atmosphere as an attempt to fight global warming.

SAG, by your own admission, is expected to kill 10,000 people in the first year alone.

Of further concern is the overwhelming amount of evidence that indicates such practices are not mere proposals but are already happening in our skies. (Incidentally, as you will find in The Directive, this would not be the first time the UK population has been covertly sprayed.)

Please would you provide me your responses to each of the following questions:

I look forward to your response to each of these questions.

PS – This is an open letter, published at chemtrailsprojectuk.com and geoengineeringwatch.org where our future correspondence will also be published.

The above letter was posted to Dr Keith on 11 October 2014 by recorded mail.

Please also help by sharing this article widely. This will not only increase awareness of chemtrails and geoengineering, but will also increase the pressure on Dr Keith to provide a full response.

As soon as we receive it, we will publish Dr Keith’s response on the Chemtrails Project UK website.

Here is the full interview (6 mins 22 secs) of Dr Keith getting a (very entertaining) grilling on the Colbert Report. (The video quality is poor for the first few seconds, but it is fine after that.)

9 Responses to “An Open Letter to Dr David Keith”