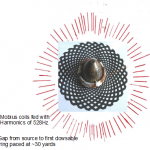 There are two type of subtle energy (i.e., energy that is not detectable with physical instruments). The most commonly known type is syntropic energy. It is often referred to as orgone, chi, or life energy, etc. and is an influence that promotes organisation. For example, the organisation of molecules, as in living organisms.

But I have identified an “anti-life energy.” This is one which promotes randomisation, or disorder. Just as we know entropy as the disordering process that accompanies any discharge of physical energy, an Italian mathematician (Luigi Fantappie) invented the word syntropy for the organising process of life.

To begin many years research on “subtle” energy, I found that, by dowsing, I could detect it in the form of a field that surrounded pyramids, orgonite and other sources. This showed as a series of rings, where my dowsing rods moved back and forth, with a gap between the source and the innermost ring where the rods did not move. The radius of the first ring then proved to be linearly related to the energy of the field – as shown by dowsing measured volumes of water previously charged by proximity to a source of life energy. Then, by making a pair of identical images on paper (unique images, not like any available publicly) and putting one close to a source, I then found that the energy of the source could be dowsed from the other image at any distance. That is so-called “non-local” transmission.

Desiring objective measures, I set up seedling growth experiments, recording their weight increase after 2 days incubation. In this case I used an electrical source of syntropic (organising) energy, and sent its energy, non-locally, to the incubator containing the seedlings by means of a pair of images on paper. Highly significant growth increase was obtained.

At this point, some time in 2012, after I had been dowsing a jar of charged water regularly, I noticed that it had begun losing its charge more rapidly: i.e. where charge had normally been retained for several days, the water was now often losing charge in a few hours. On learning that chemtrails might contain aluminium (and learning of the unique properties of aluminium, discovered by Russian scientists) I conceived the cause might be the passage of the sun’s syntropic field through particulate aluminium. So I set up a similar seedling experiment, but in this case the electrically-produced syntropic field was passed through a stainless steel pan of alum solution before impacting on the image used for transmission to the incubator. The result was a highly-significant inhibition of seedling growth. It also resulted in very rapid discharge of charged water: in a few minutes.

At this time I began regular dowsing a piece of orgonite, and found its energy to have become extremely variable, even during a single day.

Since then, I have tested the time for retention of charge in water at some remote locations: Italy, Madeira and South Morocco. In all of these, retention was much longer than I had been seeing in my location in Surrey. 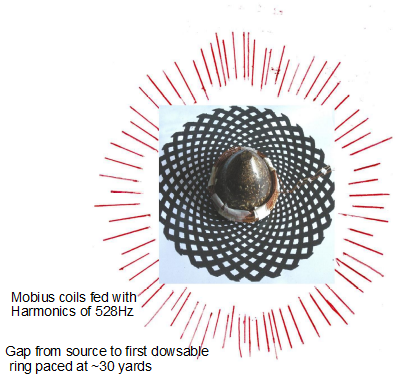 In 2015, I made a very powerful syntropic source, including geometric and electrical elements together with orgonite. The success of this was evident in dowsing measurements, for which I had to walk some way down the road. But rather suddenly, sometime in January 2016, the powerful unit went almost almost completely “off” – i.e. hardly dowsable. Ever since then it has been extremely variable, and many days more off than on. Keeping a close watch on chemtrails (whenever the sky is clear enough to see them) I am as sure as I can be that my sources go off some hours (or the next day) after seeing the sky covered in chemtrails. During this time, I think, the aluminium particles would be spreading out into the stratosphere. Moreover, this degree of variability has made seedling growth experiments impossible.

During 2016, together with other members of the Dowsing Research Group, I have found that wearing a “hat” of aluminium foil changes ones dowsing response radically. I find that it can completely abrogate my ability to dowse syntropic sources, such as pyramids, etc. while enabling me to dowse what I’m calling entropic sources. Thus, in addition to the alum set-up used to inhibit seedling growth, I find that, while wearing such a hat I can dowse processes such as burning (e.g. a candle flame) or evaporation of acetone, where an increase of entropy is going on.

In recent weeks I have been making regular dowsing of a number of sources, both with and without the hat. Some of them are often dowsable both with and without the hat, but in varying proportions. Among my sources, some are more susceptible to the “chemtrail influence”: particularly an orgonite containing magnetite; others are almost resistant, such as a plasma tube instrument.

My articles are to be found in the Syntropy Journal.

Like you, no doubt, I am keen to find out the purpose of this secretive and hugely expensive operation. To prevent supposed global warming, which is often suggested, hardly accounts for the secrecy. And while some say it is intended to reduce population, there is currently little evidence of success. Thus I am looking for ways in which an entropic influence might serve the purpose of big powers. One way which seems possible is to prevent the operation of free energy devices. As these depend on cohering the zero-point energy, then the de-cohering influence of chemtrails might do that. We will not have long to wait for a result since at least one type of free energy is about to become public, under the name “oxy-hydrogen”, as presented in my article, hopefully forthcoming.

On the other hand, could it be in some way related to mind control? You may be aware of talks by this German scientist, Harald Kautz-Vella, who is suggesting some far-out ways in which chemtrails might manipulate populations: 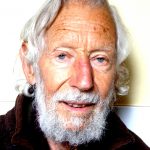 After a career in fundamental immunology (and becoming disillusioned with mainstream science and medicine) Roger Taylor took early retirement to begin many years research in life energy (or orgone, chi, etc.). This work has resulted in 4 publications in the Syntropy Journal). At the same time, while maintaining an interest in free energy, he built a Brown’s gas generator from a kit, with encouraging results. After taking up Buddhism, he wrote an article: The Great Work: Healing the World by Collective Meditation, which was published in Nexus some years ago, and re-published in the Syntropy Journal. He can be contacted at rogerbt41@gmail.com.