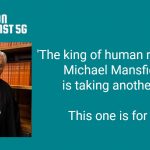 The much-anticipated fundraiser for the UK’s Action Against 5G began this morning, 23rd May 2020.

The government’s actions in authorising 5G are a breach of human rights. We are challenging the government to stop its unlawful action in failing to protect the public from the health risks from 5G technology which we all face through its rapid deployment.

Related: Cities, Towns, Councils and Countries That Have Taken Action Against or Banned 5G. Is Yours One of Them?

Michael Mansfield QC is leading our legal team challenging the UK Government over its failure to take notice of the health risks and public concern related to 5G.

One of the most venerated barristers of our time, Michael Mansfield has led legal teams in high profile cases of civil liberty and miscarriages of justice. He has represented the families of Grenfell Tower, Lockerbie, the Ballymurphy Massacre and Stephen Lawrence.

He was recently described as “the king of human rights work” by The Legal 500 and as a Leading Silk in civil liberties and human rights.

Why People Are Concerned

People in the UK are becoming increasingly alarmed as they learn of the serious implications of the 5G roll-out: to their own health, the environment and all biological life.

No one wants a mast emitting high levels of radiation outside their home, their child’s school or their place of work. The ‘benefits’ claimed by the telecoms industry come at a very high price.

5G radiation will be sent from advanced antennas, in phased arrays, that transmit microwaves in narrow beams, a technology originally developed for military purposes. This will massively increase the exposure to radiation from those beams. Those beams will be nearly everywhere.

The wireless telecoms industry intend to outfit nearly every lamp post or utility post around the country with wireless small cell antennas beaming hazardous radiation next to, or into, our homes, schools, work places and everywhere, 24/7 as well as intensifying  4G throughout the countryside.

Why a Legal Case?

Our legal case is headed by Michael Mansfield QC, renowned for upholding Human Rights, supported by a robust and committed legal team.

Nothing other than a legal challenge will force a government to take notice; this is the only way to ensure the government engages with the issue.

We bring this case because we lack confidence in Public Health England. PHE has dismissed multiple warnings from both government and independent scientists including many Scientific Committees for Health and the evidence of thousands of peer reviewed scientific papers. Instead it accepts outdated opinions from unreliable and unaccountable agencies.

Since 2000, when The Stewart Report recommended the government apply the precautionary principle to electro-magnetic radiation, the government has failed in its duty to protect health.

Our concerns include the imposition of radiation on the population without consent and the serious matter of privacy, surveillance and social control.

No Safety Testing for 5G

5G will result in unprecedented exposure to a particular type of phased radiation at frequencies that have never been used in consumer applications before.

Whilst research on the new modulation and use of higher frequencies is sparse, there are publications which suggest harmful effects to human and animal health.

Industry has not produced a single study to show that 5G is safe or undertaken any risk assessment for effects on humans, wildlife and the environment for this laser-like beam forming technology.

5G will increase the microwave and millimetre wave radiation in our environment and it will use new frequencies that have not been evaluated for safety.

Experts warn that the effects of the combined exposure with existing radiation from GSM, 3G, WiFi, 4G will cause serious damage to health. There is already a substantial body of evidence demonstrating that existing radio frequency exposures are harmful to health.

Since the effects of 5G on all biological life have not been tested, and there have been no safety studies into short or long-term health effects, no-one can say that 5G is safe.

Reassurance of safety is currently based on the long obsolete view point that radio frequency (RF) radiation can only cause harm above thermal, tissue heating, levels of exposure. This concept has been invalidated by hundreds of peer-reviewed published scientific papers.

Insurance underwriters such as Lloyds of London and Swiss Re have weighed up the risk; Swiss Re class it as a future ‘high-impact risk.’

In their information to shareholders, telecommunications companies warn about potential loss of share value due to future litigation related to health risks.

The consequence of doing nothing will allow irreparable harm to all life, most particularly the unborn, children, the elderly, anyone with underlying health conditions and people with metal implants.

There will be a fundamental difference in our lives, we will lose our privacy as surveillance and social control by industry and governments becomes ubiquitous, tracking and monitoring leading to behaviour modification.

We might ask ourselves whether we wish to have our lives become the property of any corporation for control and profit. Are we to be obedient to the interests of others, with choices reduced and decisions determined by an algorithm?  Or do we value our right to self determination without coercion, and free from harm?

Damage goes well beyond the human race, as there is growing evidence of harmful effects to both plants and animals.

The deployment on this scale of pulsed microwave radiation is reckless.